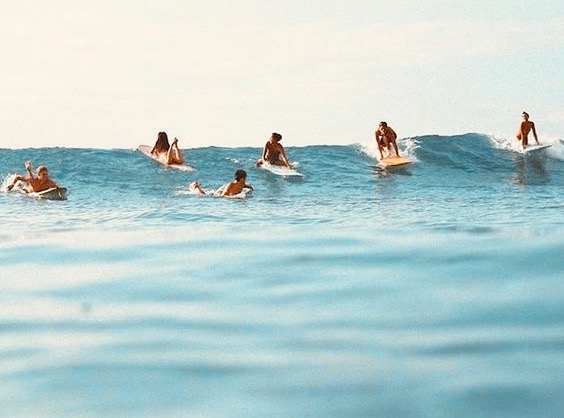 So you are venturing beyond the white wash? Be prepared for some of the best rides of your life. But before you go, understanding surf etiquette ensures everybody’s safety and enjoyment.

There is an expectation that all surfers (with the exception of learners in the white wash) know and follow surf etiquette. Study and follow the advice below and you can paddle out at break in the world knowing your place and rights.

Know your limits. Only head out into a lineup that is within your skill ability, otherwise you are likely to not get many waves, which = frustration! And more importantly, you can end up being in the wrong place at the wrong time and putting yourself and others in danger.

Spend some time watching the surf before racing out. How frequent are the sets? Where are the other surfers getting in and out of the water? What is the tide doing and are there rips or rocks? Is it possibly bigger than it looks? Finding your own peak on a crowded beach is ideal. It may not have the BEST waves but removing the worry of other surfers can up the fun factor big time. Be sure to observe your spot carefully before heading out. Having at least one other person is much safer (and way more fun!) than surfing alone

And very importantly: It is your responsibility to stay out of the way of oncoming surfers. If a surfer is coming straight toward you, don’t cut across their path in an attempt to reach the shoulder of the wave. Instead, sorry…you have to make the sacrifice and commit to paddling towards the broken wave and deal with getting through the whitewater.

You know those photos from the 60‘s when sharing a wave was ultimate fun? The more people the merrier. Surfers today don’t actually want to share the wave they have caught with you! At all! Those surfers in the 60’s were actually all dropping in on each other! So who was dropping in on who?

Dropping in on people is bad. Very bad. If you take off on a wave that somebody else is already on, you are dropping in on them. If it looks like the surfer isn’t going to make it don’t just make assumptions and start going for it. Experienced surfers will usually surprise you and easily make it around fast sections. Even your attempt to paddle into a wave will make it crumble early. This can be annoying for the person up and surfing the wave.

The fundamental law of surfing is the surfer nearest the breaking part of the wave has the right of way. Always. Many breaks come with a pecking order of local surfers who have earned their rights for priority position (closest to the breaking part of the wave). It can be frustrating to see the same people paddle past you repeatedly getting all of the good waves. Just remember that they were once starting out too…they have had to work their way up the pecking order over time by developing their skill and gaining respect from other locals.

If a surfer falls of the wave and you are next in line then it’s all yours…spin around and start paddling for it. In crowded line ups surfers are always poised and ready to take a wave that somebody has fallen from. Know about the right of way rule and be ready.

This is a maneuver used by a surfer to obtain priority position when it’s not actually their turn. Deliberate, repeated snaking is pretty frowned upon. On return to the peak after catching a wave, a surfer should position themselves behind those who may have missed out on the last set, respectfully allowing them next priority. If everybody abides by this etiquette then waves are shared and there is harmony in the line up. Deliberately paddling back out on the inside of others still waiting and then putting yourself in (or even hustling for) priority position is snaking. Note that a degree of local pecking order comes into consideration here (see right of way above).

Locals will generally dominate the best part of the peak and they have the right to do so. Naturally, nobody wants to let a good wave go by, and at times (as luck might have it) a surfer might just happen to find themselves accidentally next in line. For example when paddling back out, a surfer finds themselves in the deepest position of the oncoming wave, despite there being others lined up, they turn and take it. That is their luck.

If you sit wide out on the shoulder (which might be where you are most comfortable to start with) you unfortunately leave room for others to paddle up your inside…often. When that perfect, smaller wave comes along, those on your inside will have priority to go… and naturally they will. Over and over again.

It is up to you to find that balance of sitting where you are comfortable while still being in contention for waves. One way to avoid being dis-counted then you have to act confidently while always respecting your limits. That’s right, fake it ‘till you make it. Paddle into waves powerfully and don’t hesitate or pull back. Observe other surfers who are catching a lot of waves. Engage in a positive mental conversation with yourself “I’ve got this! I can do it, Im a good surfer…”

It’s not always those with priority that choose to take off. Read other surfers movements in the line up as waves approach. Be confident, committed and ready to go & you could find yourself on a set wave.